A previous company I worked for held a summer work party in July. Many of my fellow employees would schedule their vacation to coincide with the date of the party; but not me. I made it to the work party every year for 3 years, because every year they had a dessert contest. Every year I strived to win it, and every year I went home miserable and gloomy (I’m the worst kind of sore loser you can imagine).

When we moved into our new ward, (The Church of Jesus Christ Of Latter Day Saints) we discovered they held an annual Chili & Dessert Cookoff + CO2 Derby Car Race. It was heaven sent! I had an opportunity to prove myself without any previous held biases against me. I spent weeks deciding what to make, how to display it, how to maximize the number of pieces through cutting styles, and I settled on a favorite recipe of my mothers: Caramel Walnut Flan.

The anticipation was grueling… but finally, for the first time, I didn’t go home with funeral bags until my eyes! I was the champion baker and I wore my badge of glory proud.

So satisfied was I that I had finally won my prize, I barely remembered the date of the party the following year. The day of I simply whipped up a German Chocolate Cake and tore into the cookoff 3/4 of the way into it. My efforts were not in vain: I was the prize winner again!

This year I went back to step one. I lamented over what to bake, a revered or new recipe? A comfort dessert, or risk my luck with something out of the ordinary? I finally decided on an amended comfort version of pumpkin cheesecake.

Warning: We are back to the camera phone pictures!! 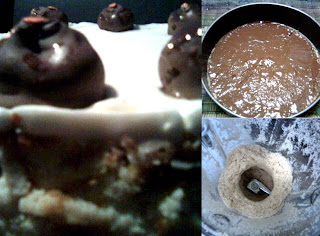 Melt together and press into bottom of pan. Bake for 10 minutes at 325°.

I then thought it would be fun to create a layer of chocolate sauce between the crust and the cheesecake, so I layered the crust with a thin layer of Fahrenheit 350° chocolate sauce, (2-3 tablespoons) warmed up a bit.

Then I added a layer of cheesecake and poured it over the chocolate layer:

Whip together until smooth. Beat 2 egg whites, fold into mixture.

And then I added a layer of pumpkin cheesecake:

Whip together until smooth. Beat 2 egg whites, fold into mixture.

The two cheesecakes will combine when baking so no need to combine or incorporate the two.

Remove from over and immediately run spatula along sides of pan. When cooled remove outer edge of spring form pan.

After the cheesecake had cooled I topped with a layer of butter frosting. 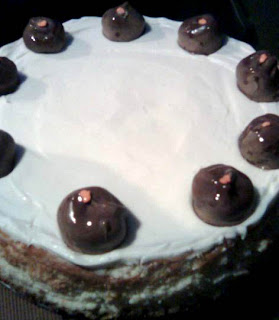 The decorative toppings on the cake are scratch made vanilla chocolates. The center is comprised of a vanilla buttercream and then the candy is dipped in chocolate and topped with a orange pumpkin candy sprinkle.

Typically there are 3 winners: Best Crust, Most Fruity, and Best Overall. I wasn’t paying attention to all the categories I was just listening for the third name… and when my name wasn’t called I’ll admit I started falling into my dejected state. The organizer pulled a little trick though and added a third category, Best Texture or something, so my name was called fourth – for Best Overall! Title Defended!

When I accepted my golden trophy, I held it up with one hand, raised my other hand into a fist and shouted: “3 years in a row! Whooooooooooooooooooo!”

0 thoughts on “Defending a Title”