I mentioned before that I have a compulsory addition to the television series Lost, and my hint in Monday’s Food Appreciation post regarding my excitement for Christmas, (in terms of excitement) was of course about Lost. This post may further reveal my complete obsession with the series:

“We will attempt to shift the test subject 100 milliseconds ahead in four dimensional space. For the briefest of moments, the animal will seem to disappear, but in reality…”

Dr. Halliwax, with his one permanently raised eyebrow, is so cool!… right? 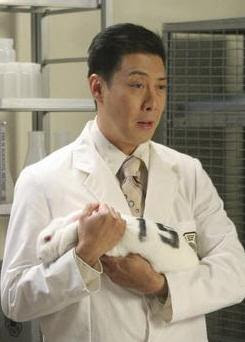 Of course, we know that Einstein first proved the mathematical possibilities of multi- dimensional space in E=MC2, or the theory of general relativity. We know that we live in a three dimensional universe; length, width, and height, and that we can grasp easily a feasible understanding of a fourth dimension; time. We live with this understanding everyday. Dr. Hugh Ross PH.D. provides an easy to grasp analysis of dimensionality in his book: “Beyond the Cosmos.” To paraphrase he explains that each dimension can be visualized as a line; one straight line depicts length; add a line at an intersecting 90° angle and one can visualize width; create a third 90° angle and height or volume enters the picture, and so on. In the same manner which we conceptualize our previous dimensions, we can add an infinite number of 90° angles to envision an infinite number of dimensions.

From this we can conclude that an infinite number of dimensions have the possibility of existing and likewise an infinite number of realities and time lines. Because we can only understand four of a possible limitless number of dimensions, does not mean that other dimensions do not exist. So goes the old adage: ‘The more I know, the more I realize I don’t know.’ Therefore, someone with the power, or ability, to find the intersecting 90° angle where all the lines unite could potentially access all or each dimension. I question if that wasn’t the equation Ms. Hawking was determining at the end of the show with her fancy chalk pendulum.

Bearing this in mind, with the information we receive from Halliwax, I question then: Has the island disappeared? or in reality is it merely and briefly tottering in another dimension.

With such a possibility, the question remains: Can one intersect or alter a converging timeline? This seemed to be the theme of the Season 5 Premiere of Lost ( ABC, Wednesday nights, 9/8 central) and up till now we have been left in a quandary regarding whether the previous miraculous and unbelievable events have been real or not. The many appearances of Christian Shepherd on the island, Horace repeatedly chopping down a tree to build his cabin though he’s been dead for 12 years, the intervention of Ms. Hawking in Desmond’s life after he turns the fail safe key, Charlie visiting Hurley at the mental institution, and now Faraday disturbing Desmond in the hatch in a time line prior to the plane crash, number just a few of the many examples that come to mind.

We are given one of two possibilities, either the island is moving through time, or the island inhabitants are, provided that Faraday’s theory is correct; who by the way provided a pretty solid explanation to all us non quantum physicists viewers, and if nothing else we learn in the opening revelatory scene, as well as in this little ditty here (thank you Comic Con ’08), we know the time shifts haven’t ended yet.

Though we have been led to believe that the past, the future, the present can’t be changed from the course they are traveling, I believe this is a false notion. I believe we will learn that the past, the future, and the consequent present can be changed, and this bologna about course correction is just that. Evidence for the contrary is strong though – one could argue Faraday inserting a memory into Desmond’s past was simply an event that was meant to happen, an alteration designated to occur in the future not in the past, and by such reasoning one could apply the same theory to explain what Alpert means when he finds Locke shot in the middle of the night and says, “Well, you will tell me,” and so forth with other various situations… But I believe that Faraday knows that events can be changed, he just doesn’t want irresponsible people to know it. Proof of this is shown in the video above, as well as Faraday finding Desmond in the Swan hatch, and sending Desmond to find him at the University.

The primary evidence, however, which alludes to my theory, I believe was given when Dr. Marvin Candle (aka Dr. Edgar Halliwax) tells the Work Man in the opening scene, after giving him a brief explanation of the stations purpose, “There are rules.” You remember when Martin Keamy killed Alex, Ben’s daughter, Ben exclaimed: “You changed the rules!” Though we haven’t been given an explanation of the parameters of the rules of the island, I am convinced that Ben, Alpert, now Locke, and other choice island inhabitants have witnessed multiple time lines of the future; as they have remained on the island when others have moved it. Hence, the rules refer to what must not be changed, not that the future can’t be changed, but that it should not be changed.

Here are a few of my other theories:

To mark the occasion we celebrated with fellow Losties and with chips and spinach and cheese dips, pizza, sausages in blueberry blankets, a relish tray and Claire’s. 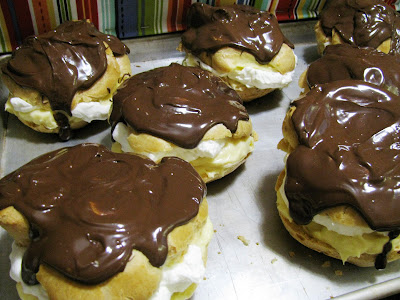 Puff’s:
Bring 1 cup water to boil over med-high heat
Add 1/2 cup butter, allow to melt
All at once add 1 cup flour and 1/4 teaspoon salt
Rapidly and briskly stir with wooden spoon until dough sticks together and forms a ball
Remove from heat and allow to cool slightly
Add four eggs, one at a time, and beat dough until incorporated

Drop spoonfuls onto cookie sheet dampened with cold water
Bake at 400° for 15 minutes, lower temp to 300° and continue to cook for 30 minutes
Remove from oven and slice to allow steam to escape 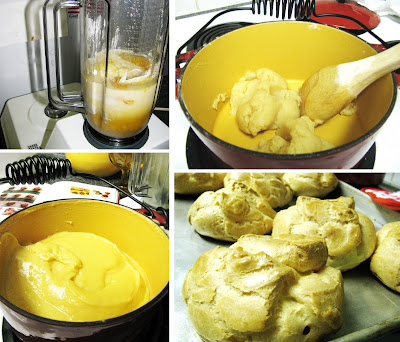 Custard:
This is my delightful Bammieroo’s (my Grandmother) recipe, with a slight alteration of course. I use this custard for coconut and banana cream pies as well; one of my Bammieroo’s specialties.

While heating, take half of milk mixture and pour into blender – and add
2 eggs
1/2 cup cornstarch
3/4 powdered sugar
3 oz. vanilla pudding mix (do not use instant)
Pinch of salt
Blend on high for a couple minutes

When milk is nearly boiling, add mixture and stir constantly
The mixture will become thick and glossy
Continue to stir until the entire mixture is of the same thick consistency
Remove from heat and continue to stir for a minute or so
Allow to cool slightly and put in fridge to chill

Once chilled, add 1/2 cup of whipped, whipping cream and beat until custard is smooth and creamy

Finalè:
Fill bottom half of puff with heaping spoonfills of custard
Top with a layer of whipped cream
Replace puff top
Coat liberally with a generous layer of melted chocolate
Celebrate Lost with your Claire’s, and contemplate the fate of the island inhabitants and the world 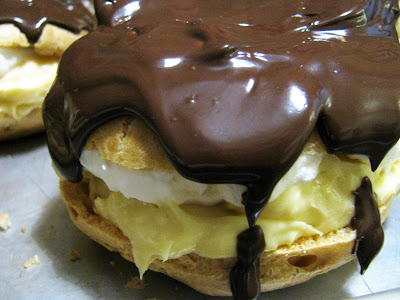