It has arrived: The posting date of my first Daring Baker’s Challenge!!!

I hinted in my Valentine’s Day post about this cake, and even snuck in a hidden picture that was hardly what you would call visible. I will admit that I was not looking forward to this recipe for the mere fact that I attempted a flourless cake about 8 years ago and the result was an unappetizing mess. It didn’t dawn on me until I finished this challenge that my previous failed attempt may have been because… I hadn’t a clue what I was doing (shocking, I know!). 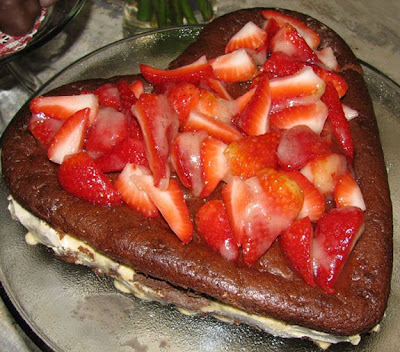 16 ounces of chocolate, your choice

(As an accident, I used only 8oz – 4oz. milk chocolate, 4oz. German Chocolate, but loved the results with only half the chocolate)

Whip the egg whites until stiff peaks are formed; do not over-whip or the cake will be dry

Fold whites into chocolate egg mixture 1/3 at a time,

For a true Valentino cake, pour batter into prepared heart shaped pan, however a round, square, or spring form pan will work just as well

Allow cake to cool in pan for 10 minutes, then transfer to wire rack

Although the cake is fully cooked, it may sink a bit in the middle as it cools

When cake has cooled, slice in half and wrap halves tightly in plastic
Set in freezer for several hours until firm 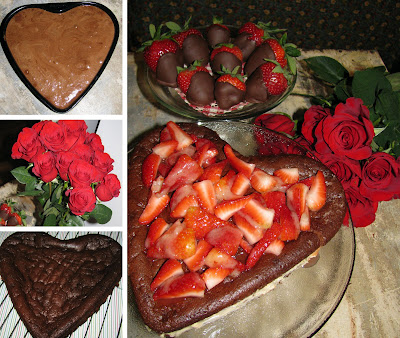 Return to heat and add:
1 cup of peanut butter – I prefer homemade or Adam’s, it is more gritty than the commercial brands, and it is 100% natural with no sugar added
Stir constantly

Cook until mixture coats the back of a spoon

Preparation:
Fresh out of the Ice Cream Machine is the best time to spread your ice cream, so do simply that
Spread ice cream about 1/4 inch thick over the bottom layer of your cake
Place top layer over the ice cream, wrap tightly again, place back in freezer 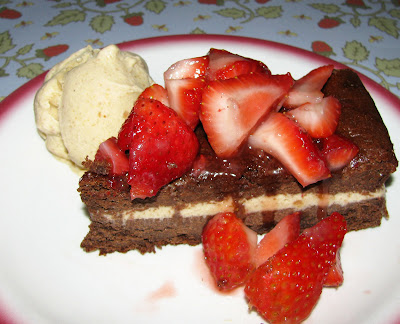 This venture was much more successful than my original attempt so many years ago! This cake is deliciously decadent and is perfectly paired with peanut butter. The cake’s texture is thick and flavor translucent, and because this ice cream is a custard base and not sweet, although frozen, neither cake nor ice cream truly retain that sensitive composition which often accompanies frozen desserts, and that makes for a distinctive combination.