Gabriel only likes one type of cheesecake, and that cheesecake is plain with a baked sour cream top layer. He doesn’t even like a little lemon juice in it. Needless to say, that’s the only type of cheesecake I make if anyone but myself is going to enjoy it.

The April 2009 Challenge is hosted by Jenny from Jenny Bakes. She has chosen Abbey’s Infamous Cheesecake as the challenge.

With the order to be creative accompanying this month’s Daring Baker’s Challenge I couldn’t very well present a plain cheesecake, regardless of how much Gabriel loves it. The recipe given was also a bit different from the standard Philly Cream Cheese recipe I always resort too, and since cheesecake reminds me of ice cream in cake form, when I saw that cream was one of the ingredients, I instantly envisioned root beer floats. 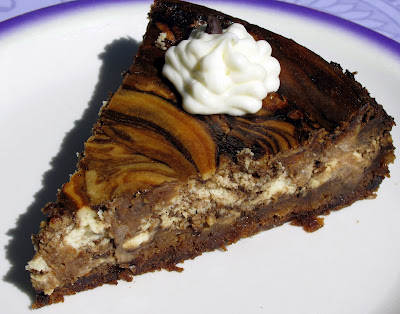 Add:
3 large eggs
One at a time, mixing well between each addition
Add ½ cup heavy cream with addition of last egg

In a separate bowl stir together:
½ cup heavy cream 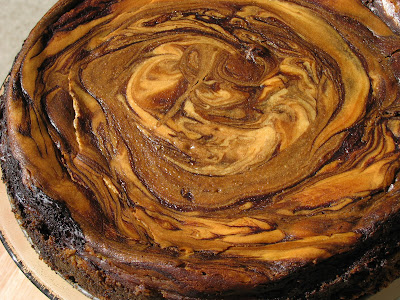 Bake at 300°F for 45-55 minutes until cake is set, but still wobbly
Turn oven off but allow cake to cool in oven for a minimum of 1 hour
Transfer to fridge, chill before eating 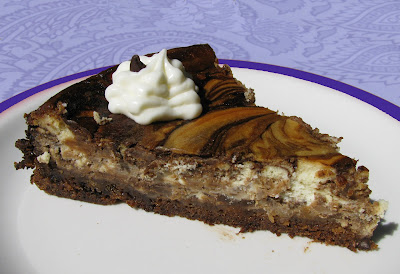 It literally tastes just like a Root Beer Float! Smooth, with pockets of both Root Beer content and cream, and with a paisely ornate top crust to boot! The only thing missing is the decadent ice crystals.

0 thoughts on “Straying From the Ordinary”