My only regret is that I didn’t make more. 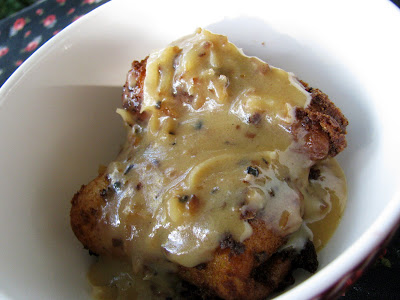 The one year wedding anniversary is traditionally represented by paper. For our one year anniversary Gabriel gave me a paperback book, “Basic Tagalog” and a round trip paper airplane tickets to Manilla, Philippines.

This month’s Sugar High Friday is travel themed, hosted by Heather at Diary of a Fanatic Foodie; my SHF theme is Philippines.

The Filipino’s make a tasty dessert with bananas wrapped in lumpia, and while I was searching out varying recipes I came across this Filipino version of fried Ice Cream, and violà: that is how you make a food baby.

Gabriel lived in the Philippines for two years, but alas I only got to visit for an incredible two weeks. 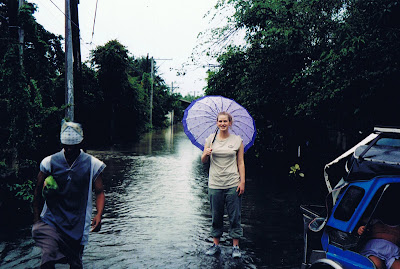 There are three seasons in the Philippines: Hot, Hot and Rainy and Really Rainy. We visited when it was the Really Rainy season. This is a major street flooded with rain. One day while we were visiting friends it began to pour, and literally, in a matter of a few minutes rain had filled a huge industrial size 40 gallon garbage pail overflowing. 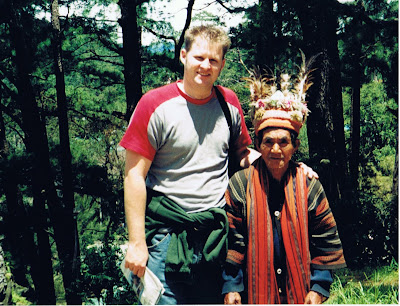 This is Gabriel posing with a native Igarut, a tribe of indigenous people to the Philippine Islands. In Baguio, the summer capital of the Philippines, we visited Wright Park where we met this man and also rode horseback through the park.

In the capital, Manila, there is a huge marketplace called Green Hills Market where you can find anything, and everything you could ever want from pearls to Nike shoes. The Filipinos are exceptionally skilled in woodcarving, and at Green Hills we bought a set of Igarut chess pieces. 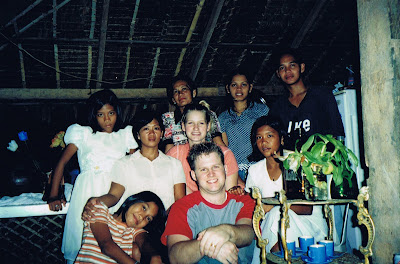 This is Gabriel and I posing with the Beuno Family. Terista is located just behind me, left of her is her daughter Zhara and her son Salvi, and to the left of Gabriel is her other daughter Christine. The rest of the people in the photo were neighborhood friends. We spent the majority of our trip with Terista and her family; the kindest most wonderful people in the world.

This treat is quite literally the most perfect thing you will ever consume. A warm, soothing, crispy blanket envelops a cool, taut, tropical paradise; just like my favorite Filipino Island.

This is an easy recipe, but it does involve many steps. 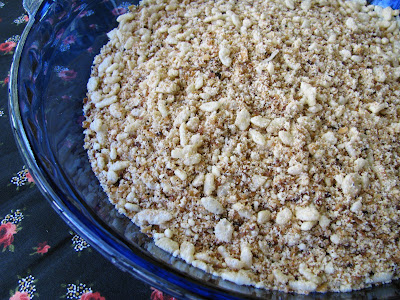 Step 3: Tropics
Cut whole bananas in thirds, then slice each third lengthwise in half
Soak for 1 minute in 1 cup heavy cream & 1 whipped egg (use more depending how many bananas you are using)
Roll in crumb coating until densely covered
Chill in fridge for 5-10 minutes

Step 4: Blanket
Wrap coated bananas up in crêpe blanket; place banana in middle of crêpe, fold each vertical side over the banana, then roll the banana up like sleeping bag
Pin with a toothpick 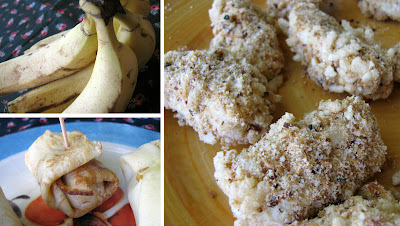 Step 5: Chill
Remove toothpick
Soak filled crêpe in heavy cream/egg mixture taking care to coat all sides evenly
Coat crêpe in crumb coating; crêpe should not unravel at this point
Chill in freezer for at least one hour

Step 6: Fry
Heat oil to med high
Completely submerge crêpe in hot oil for 2-3 minutes
Remove and bloat with paper towel briefly
Serve under a layer of Fahrenheit 350° Toasted Coconut Sweet Sauce
(Some crumb coating will be released from your crêpe as it is fried, simply scoop away with slotted spoon – but do so quickly so it does not make your oil burn)

The warm fried crêpe will delight your senses as you nibble luxuriously to unveil a toasty magnificent chilled banana. 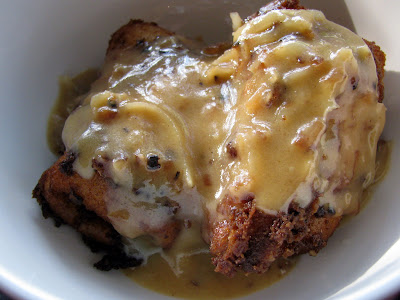