When it comes to food I have an unadulterated infatuation; competing textures, pairing flavors, artistic fabrications, palatable selections, ceaseless variations. Though as is obvious, dessert tops the index with an irresistible penchant.

Last week I was invited to review Z’Tejas, a Southwestern Grill located in the contemporary Gateway District of Salt Lake City, Utah. Z’Tejas possessed every component of my desired infatuations; I give it a grinning recommendation with spinach in my teeth.

The evening manager on our visit, Brandon Cluff, invited us into the ambient dining room and immediately welcomed us with a captivating personality that embodied the atmosphere of the restaurant.

Z’Tejas earned it’s name by paying homage to it’s 1989 starting place, in Austin, Texas-Tejas being the Spanish name for the home state (the j is silent), and has 10 locations across five states, including California, Arizona, and Washington. The Gateway location opened in 2001, just prior to the 2002 Olympics hosted right here in Salt Lake City, and was the first restaurant to open in the Gateway Shopping Center.

Cluff took us on a verbally guided tour of the restaurant beginning with the kitchen, where the restaurant houses a freezer no bigger than your average at home freezer, filled with a sparse amount of items limited to fruit puree, french fries and the kid burger. Everything at the restaurant is made fresh; skillet cornbread every 30 minutes, hand prepared fresh guacamole every three hours, and spicy flavor lent from fresh chili’s, peppers and herbs. 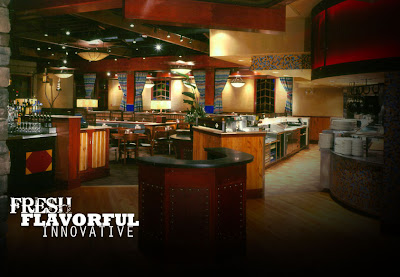 Our chef for the evening was Todd Gardiner, a local celebrity here in the Valley, who features Wednesday weekly highlights on Fox 13 News sharing recipes and techniques. Though I was disappointed that I did not get to meet Chef Gardiner, his execution of the menu did not disappoint.

We began our meal with: Hibiscus Zinger Tea, a combination of syrup made from the Hawaiian Hibiscus flower and seltzer water, and will soon be featured on the menu. 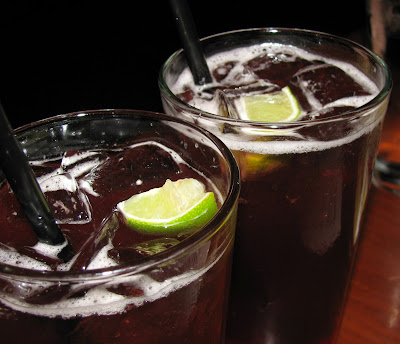 It’s distinct flavor was poignant, alluring, and a bit sharp, satisfying my craving for variation.

We were also served our individual skillet of hot cornbread with a side of honey butter, a replacement of the bread option found in so many restaurants. The cornbread is a staple of Z’Tejas and is an expression that this restaurant is more than just another Mexican restaurant…, and this cornbread, is more than just another buffet style cube shaped yellow bread. With a crunchy brown exterior, achieved from baking in a skillet, the inside is a fluffy, moist and decadent cake like bread that warms all of your senses. The secret ingredient? yogurt. 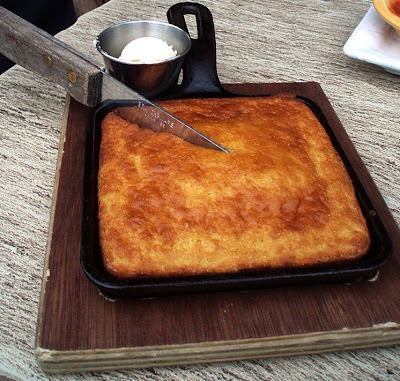 I confess: When our cornbread arrived, the smell alone evicted a ravishing desire and upon my eagerness to delve into it, I neglected to take a picture. This picture, however, is hosted over at In Search of Dessert, with a great supplementary review of Z’Tejas.

At the behest of the manager, we opted for the most popular appetizer: Grilled Shrimp and Guacamole Tostada Bites seasoned with chipotle and cilantro, and complemented with julienned carrots, onions and red peppers. The crunch of the tostada chip competing with the soft meat of the shrimp and smooth mute flavor of the fresh guacamole was the perfect introduction to our meal. It was satisfying, flavorful, enticing and quite literally grilled with consummate perfection. 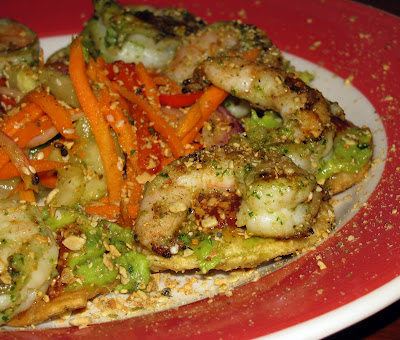 By this point in our meal, the sun had begun to set and was glaring in Gabriel’s eyes. Without complaint, it took only a moment before an employee noticed and closed the blinds; now that is service!

The menu offers a veritable selection of fabulous dishes from beef burgers to dinner salads, but when it comes to the main spread, the three top entrées served at Z’Tejas are:

With an introduction like that, we felt compelled to opt for two of them. Gabriel ordered: Green Chile Barbacoa Enchiladas. Upon ordering an enchilada dish at some restaurants (names excluded), you may find yourself the unfortunate recipient of the bottom rounds, dry, crusty, and overcooked. But, if this review thus far is any indication, you can suspect that nothing could have been farther from our experience. 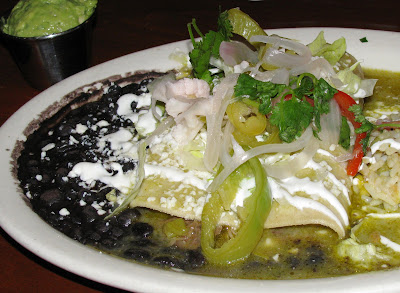 The tortillas were freshly fired, thin, and crisp. The peppers were full of flavor, temperate and accented the barbacoa and chile sauce excellently, while the visual presentation was artistically inspired.

I chose the pan seared: Grilled Miso Salmon, medium, under a mildly sweet miso sauce with a bit of kick, nestled with chopped zucchini, summer squash, red onions and a mashed potato cake. It arrived palatably pink from outside in, and the vegetables marinated in a reduction sauce, offered just a slight crunch. The potatoes were less thrilling, as they arrived half mashed, half one large chunk of whole potato. 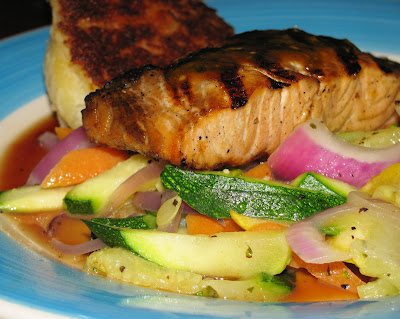 Finally, it was time for dessert! Z’Tejas offers four nightly desserts, three of which change depending on the Chef’s mood, season, or inspiration, and though we felt comfortably full, Gabriel couldn’t pass up a chance to eat his favorite dessert, and I was very determined to get my hands on the Chef’s Dessert. 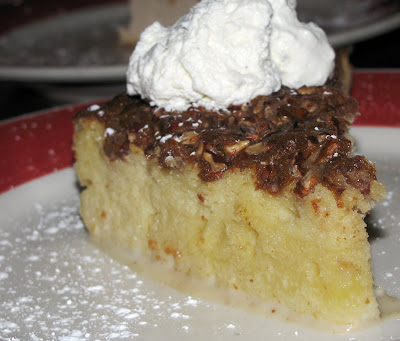 The Chef’s Dessert: Très Leche, a pecan crusted sponge milk cake. It was an exquisite texture with a browned pecan topping. It was appetizing, but didn’t stand on its own compared to the other desserts.

Gabriel’s favorite dessert is always, will always, has always been cheesecake. But, as I said, all but one of Z’Tejas desserts fluctuate, and the house cheesecake for this particular evening: Strawberry infused Cheesecake. This dessert strikes a delicate balance between thick New York cheesecake, and the subtle enchanting essence of my favorite fruit, to create an extremely dense and delightful cheesecake. 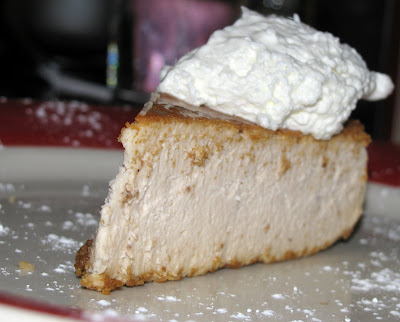 Well, then of course we couldn’t pass on the Z’Tejas famous: Ancho Pie. 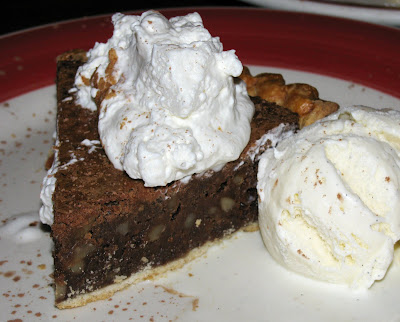 The Ancho Pie held the ticket to fulfilling my final requirement for food infatuation, the pairing of ancho chilies and chocolate, a warm walnut fudge dessert served with vanilla bean ice cream laced with cinnamon. I can easily say that this pie is a remarkable culinary achievement. The ancho chilies react with the chocolate in a tempestuous manner, teasing the cocoa and allowing it to take full reign. 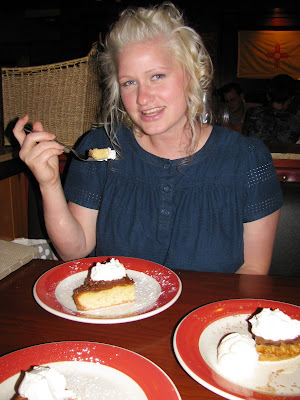 As if you weren’t completely satisfied with that, Z’Tejas is holding a 20th anniversary dessert contest calling for your best recipe. The contest runs until August 16, and requires that you send in a creative and delicious dessert created with chilies! The winner will receive dinner for 10, at their home, and their dessert featured on the menu throughout September. Click here for official rules. 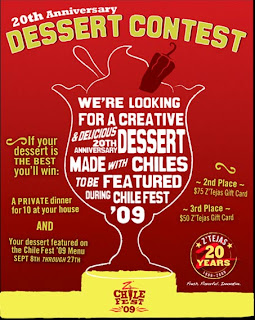 Z’Tejas lays hold on it’s claim that it is fresh, flavorful and innovative. The restaurant offers a vegetarian menu, a gluten free menu and on Monday nights, a free child’s meal with the purchase of an entrée that includes a free drink and ice cream. Not to mention the restaurant hosts a quarterly Tequila night, partnering with X96 Radio From Hell, which offers a full meal including appetizer, entrée, dessert and five specialty tequila drinks fashioned by Chef Gardiner specifically for the event priced at $75, or without drinks for $50.

Have you visited Z’Tejas? Share your opinions here, and check back in a few weeks for a fun Z giveaway!