Being that all I seem to talk about is traveling, not my travels (of which there are none to speak of) – but the hope for future world adventures, one would assume that this month’s Daring Baker’s challenge would be one I would be grinning about from ear to ear… but, I just couldn’t seem to muster up the energy to tackle it.

I was relieved when I saw someone else post a parallel sentiment on the DB forums, however, it isn’t called the Daring Bakers for nothing, so finally yesterday I set to work.

The August 2009 Daring Bakers’ challenge was hosted by Angela of A Spoonful of Sugar and Lorraine of Not Quite Nigella. They chose the spectacular Dobos Torte based on a recipe from Rick Rodgers’ cookbook Kaffeehaus: Exquisite Desserts from the Classic Caffés of Vienna, Budapest, and Prague. 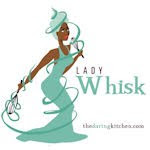 I believe Heavenly Father created chickens solely for the purpose of baking cakes. The transformative possibilities that can be created from a simple egg are vast, and the differences between the two components-egg and yolk-are far reaching.

This cake employs the best of both-egg and yolk-through the whipping process, and the decorative elements are just extra icing (pun intended). 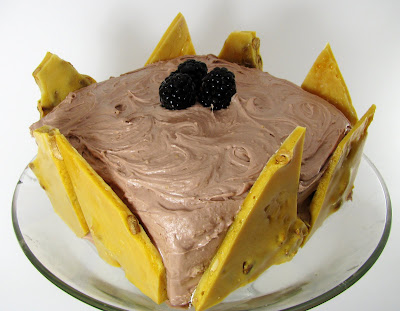 Sift 1 cup flour + 2 tablespoons, plus a pinch of salt, over eggs and fold together

Line pans with parchment paper and spread batter evenly over paper (This cake traditionally has a minimum of 6 layers)
Bake on the top rack at 400°F, 5 minutes, or until cake springs back to the touch and is lightly browned around the edge
Remove cake from oven, invert onto flat surface and slowly peel off parchment
Allow to cool entirely before trimming each layer uniformly

Finish by beating two sticks of butter into chocolate berry mixture until even and thick, one tablespoon at a time, and 1-2 cups of confectioner’s sugar 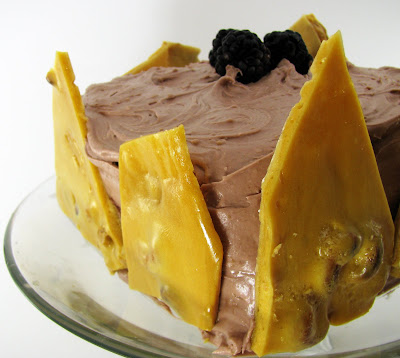 Finalè:
Frost each layer, one by one,with buttercream and a sprinkle of crushed cashews
Frost around the sides and top of cake
Break up crunch and decorate sides of cake with triangle pieces 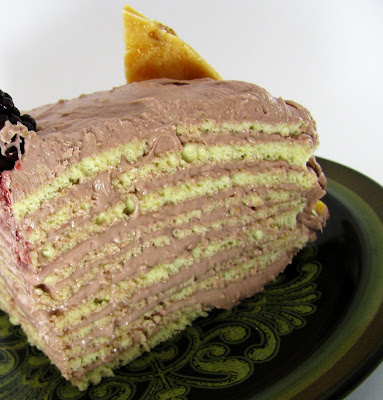 Despite my valiant stubbornness in making this cake and procrastinating until the last minute, it does taste fabulous! The textures are pleasing, the addition of blackberry is berry sweet and perfect, and it’s a showoff, but… I still don’t know how I feel about it.

…And don’t forget to enter my giveaway!