I mentioned previously that I have a bad history with bundt cake pans. In fact I’ve thrown out a few perfectly good pans just because they bested me. But then, without fail, I find a new recipe I just have to try and I’m in the middle of a mess all over again.

Finally, about a year ago, for the first time I achieved success with a Lemon Blueberry Bundt Cake. I was back in love! 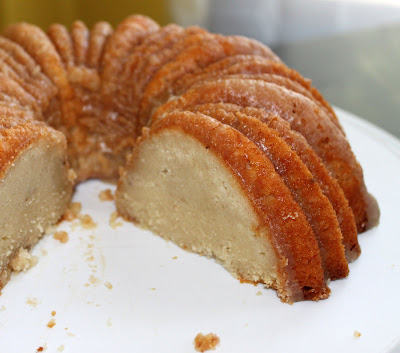 Unfortunately, that only lasted one round. The second round had me cussing and throwing things around the kitchen again. Then, miraculously, I realized something. I was smarter, stronger and better than that hunk of metal and I applied patience (something I wasn’t born with). Success again!

The best way to grease a bundt cake pan is to liberally apply butter, methodically, in every crease. Then add a second layer of oil and rotate the pan until that too has covered every inch. Place upside down over a cup in your sink for the extra oil to drip off. Then finally, sprinkle sugar over every surface to ensure you haven’t missed one single micro space. 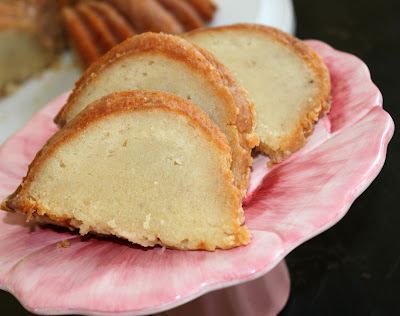 Butterscotch Sauce
½ cup whipping cream
½ cup butter
½ cup white sugar
½ cup brown sugar
Bring to a slow rolling boil over medium heat
Allow to boil for 5-10 minutes or until mixture is thick and smooth
Reduce to low, and leave on heat, stirring occasionally for an additional 10 minutes
Leave in pan, slightly warmed until cake is finished

Add 6 bananas, ripe or overripe and beat into the mixture

Pour into well greased bundt pan
Bake at 325°F for 1 hour, until cake is lightly browned and springs back to the touch
Invert on wire rack, and pour remaining butterscotch sauce over the tops and sides of the cake 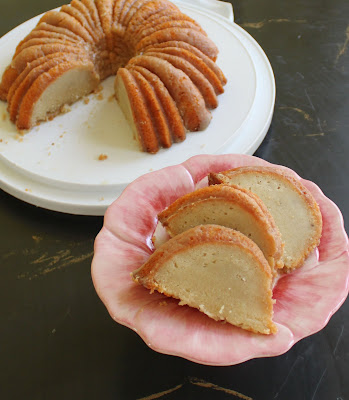 One year ago: Stand By Me, S’more Macarons
Two years ago: A Different Twist, Caramel Dipped Strawberries

Why You Should Say YES to These Yummy Buttery Marshmallow Popcorn Balls Right Now!

The simple answer is converting Fahrenheit 350° to Celsius is 180, but if you want to get super technical, everything it takes...
Read more
Cheesecake

*updated 2021 Jump to Recipe When I first made this moon...
Read more

Is the Secret to Making the Best Pineapple Upside Down Cake Double Brown Sugar Caramel?

Jump to Recipe *updated 2020 There are some desserts, though wildly...
Read more
Cakes

How do you tell the story of your child's first year of life? How do you explain each overwhelming emotion from happiness and elation,...
Read more
Cakes

Growing up as the youngest of six children I relished in the moments when I got to play little Mother to my sister's children:...
Read more