Why You Should Make Santa These Fantastic Cookies This Year

I have it on good authority that Santa is getting a little tired of chocolate chip cookies and milk! After a few millennia of the same treat, wouldn’t you? This year he wants Frozen Chocolate Peppermint Pie Squares.

One year when I worked at See’s Candies at the mall, I was visiting with Mrs. Claus during my break. She confided in me that Santa is desperate for a different treat. He has been trying for some time now to devise a way to deliver his secret wish to all the little munchkins of the world!

He tried inserting it into conversation during picture time at all the mall, but kids are just always so eager to spout off their own wish list. He found it impossible to get a single word in!

Would you believe me if I told you that two years ago, he spelled the word H.E.L.P. with candy canes in every single home across the world. Surely you remember the year your candy cane was on the floor instead of your stocking!

He even went so far as to disguise himself in early December to patronize nearly one million grocery stores in major metropolitan cities across the globe, in an attempt to buy up all the chocolate chips!

And this one might come as a shock, but for a split second he considered putting all the children who gave him chocolate chip cookies…. on the bad list!!!

I have a solution!

Stay on Santa’s good list this year by whipping up this refreshing treat! He’ll be so delighted, you will be sure to get an extra present or two under the tree! 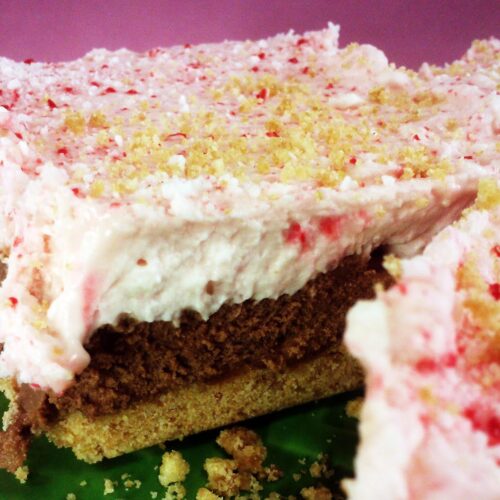 This recipe yields just enough for Santa and his 8 reindeer. Leave him a note to check for his treat in the freezer!
Keyword Chocolate Peppermint Pie

Can I Use Regular Marshmallows Instead?

Marshmallow fluff is the easiest way to incorporate marshmallows into this recipe, but yes, you can use regular marshmallows too!

This recipe has been handed down from my Grandma, and every person in my family makes it a little bit differently.

No matter what you do, you can’t go wrong!

Please note that this recipe for Frozen Chocolate Peppermint Pie Squares uses raw eggs, so if you are concerned about this you may want to check out my Candy Cane Lane Cookies instead.

Like this recipe? Check out More Christmas and Peppermint Recipes to Make Your Home Merry and Bright this Season!