This Dutch Apple Cheesecake is inspired by The Original Pancake House Apple Pancakes. Growing up, we would stop there every time we drove to Eugene, Oregon. Every time, without fail, we always ordered the Apple Pancake.

Apple Pancakes, just like this Dutch Apple Cheesecake, are a version of a European pancake lathered with caramelized apples and cinnamon sugar.

A pancake inspired cheesecake full of caramel,
sautèed apples and cinnamon and sugar
baked inside a peanut crumb crust.

How to Make Dutch Apple Cheesecake

After preparing your cheesecake batter, saute the apples and make the caramel.

Just like with an Old Fashioned Pineapple Upside Down cake, you’ll bring karo syrup and brown sugar to a simmer in a heavy skillet and add cored and sliced apples.

Allow them to simmer until soft and the caramel has thickened.

As yummy as the cheesecake is, the crust is one of the best parts. It’s made from both graham crackers and peanuts, because everyone knows apples and peanuts make a perfect pair.

From start to finish, this Dutch Apple Cheesecake is perfect in every bite! 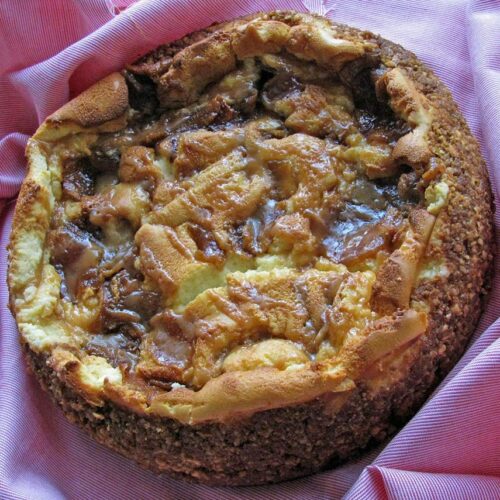 What is a Dutch Apple Pie?

Traditionally a Dutch Apple Pie is a mix between an apple pie and an apple crisp. It’s baked apples with a crumb coating, strudel, or topping.

This crust and apple topping in this cheesecake, turns it from a traditional cheesecake into a dutch apple cheesecake!

Does it Matter What Type of Apples You Use?

I say no, but many people prefer Granny Smith Apples because they are very crisp and very tart.

I actually prefer whatever apples I can get my hands on. I would love to hear your opinion.

Whenever I have made this dutch apple cheesecake, or a caramel apple pie, everyone always asks me what apples I use, and I always say whatever apples are the biggest.

How Yummy is This Cheesecake?

It’s so yummy, I barely got to snap a picture of this slice of cake before it was eaten!

I’ve always wanted one of these.

Every single size springform pan your heart could ever desire!

If you make this Dutch Apple Cheesecake, tag @Fahrenheit350sweets on Instagram so I can see it! And I’d love it if you left a review and a comment below!

Nothing Will Make you Appreciate Summer More than S’mores Macarons

How to Invent Your Own Amazing Cookie Recipe [Step by Step]