You’ve heard of Baked Alaska, but have you heard of not Baked Alaska? I mean it is a frozen ice cream cake after all, why would you bake ice cream?

And the 3 ingredients you need to bake it are simply:

Traditionally, Baked Alaska is made up of a scratch made cake, multiple layers of ice creams and then meringue. The whipped egg whites are piped onto the outside of the ice cream, and then they are cooked.

Can you say tons of work? It’s summer right now and the last thing I want to deal with is anything else that is hot.

But in this version of not Baked Alaska, not only do you not have to bake this frozen ice cream cake (which seems like it should be obvious) but you also do not have to bake anything! It could not be easier to put this awesome dessert together!

Also, in my opinion, egg whites should never be described as marshmallowy, but you know what does taste like clouds of delicious pillowy soft fluff?

This not Baked Alaska frozen ice cream cake is inspired by the character Hurley from my once favorite TV show Lost. If you care about why this is no longer my favorite TV show, read about my island inspired coconut and pecan cookies. It’s too painful to talk about again.

But if you watched Lost, then you know that Hurley was a big guy and he liked processed food. One of his famous lines from the show is: “You know maybe if you eat more comfort food you wouldn’t have to go around shooting people.” 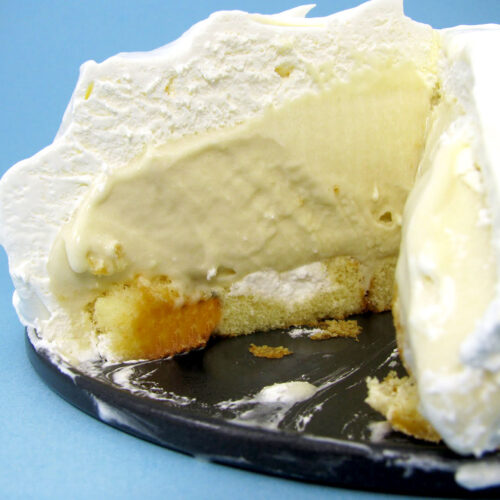