I treated my dear friend Melinda Lloydling and her family to a Birthday dinner, and as I’ve mentioned before I always try to do my best to celebrate any and all special occasions. Although this month has been a little rough, remember before when I said I can always make a cake? Well, it still rings true: Happy Birthday Melinda! She doesn’t know yet that she’s actually getting a birthday present too, but I can’t promise when it will be given, or how and if, so I’m just going to keep it a surprise! (Melinda: that means pretend you didn’t read this.) 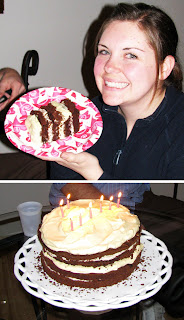 I tried to get Melinda to select a birthday cake of her choice, but she’s so sweet she let me choose, and that is actually more of a birthday gift to me; thank you. Last year she chose chocolate banana cake which I interpreted as 8 layers of alternating chocolate cake with banana cake, interlaced with chocolate frosting. Last year of course I didn’t have a camera, but it was an exquisite beauty.

Also attending the celebration last year were our friends the Marleys. We chose Melinda’s celebration to film my audition tape for: Deal or No Deal. The Marleys and the Lloydlings, along with Gabriel, were my supporters and in our video we pretended Howie was over for dinner and dessert. We wrote out a little script to perform and directed all our attention to Howie (the camera).

I wanted to include my audition tape, but our video camera hates us and wouldn’t transfer from the camera to the computer. We’ve been trying to transfer for several weeks and tonight in fact, it crashed the computer and created a huge fiasco that we are still trying to recover from. So, no video.

Let me try and recreate the scene for you though. In the first video we had one really great scene at the end when I started cutting the cake, and if I were a videographer, at all, I would have done some super fancy movie magic and spliced the scenes. What happened was that as I was moving Howie’s piece of cake from the cake platter to Howie’s plate, because of my misjudgement of the height and weight of the piece, I lost control and it splattered all over the table. What followed was a picture perfect response, we all gasped, looked at the camera with pulsating neck tendons and clenched jaws… and then everyone looked at me… and gave in to laughter. We only had the one cake, the one shot at getting it right, but really we gave in to laughter, at least I did, because I realized it made the scene perfect!

The second take overall was much, much, much, much, much better. In fact we held scripts throughout the whole taping which I got a huge kick out of. We had a little bell that I practiced hitting the “deal” button with, Gabe and Benj were slapping high 5’s to each other, Gabe kept stealing everyone’s food, and I couldn’t stop laughing, so much that everyone else had to fill in when it was my turn to talk. It was hoolarious!

For Melinda’s birthday this year I chose a chocolate almond cake with alternating vanilla mousse and walnut cream frosting.

We started off dinner with a slow roasted garlic lime chicken. Add to that sour cream mashed potatoes, oven baked parsley spiced carrots, and a simple side salad with bell peppers and mushrooms. 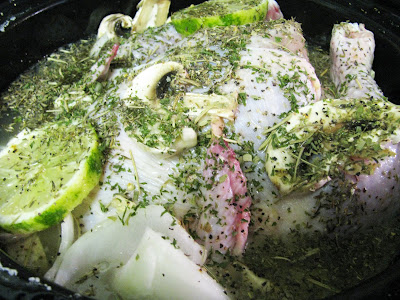 The most simple and the most delicious meal. One whole chicken, rubbed with olive oil in a crock pot on high. Add large chunks of 1/2 an onion, 1 sliced lime (seeds omitted), cloves from one garlic bunch, sliced mushrooms, rosemary, thyme, oregano, parsley, salt and pepper. Fill the crock pot half full with water. You can substitute the lime with oranges or lemons or your choice. Cover. Flip after 3 hours, done in 6.

This is a smooth thick chocolaty cake with an airy yet rich texture. For me, a deep chocolate cake doesn’t need more chocolate frosting, so for a while I’ve been trying to come up with the perfect accompaniment; this is it. The proportion of almond to chocolate is harmonious, and is enhanced by a creamy mousse.

Cream together until light and fluffy 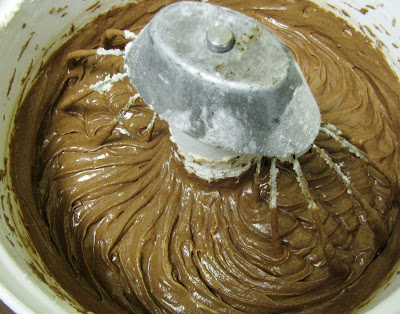 Whip egg whites and fold into mixture. Don’t over mix, allow some of the whites to remain lumpy.

Bake at 350°F for 30 minutes, or until cake springs back when lightly touched

I knew the cake topping needed to be a vanilla mouse, but I considered all week what to put between the sliced layers of cake… more mousse? chocolate frosting? almond butter? and when I looked in my fridge and saw the remaining cream mixture from the Walnut Pear Tartelettes, I had my answer.

Beat with mixer for several minutes, until smooth and airy

Slice each layer of cake in half and spread liberally

Once again, I am inspired by Tartelette 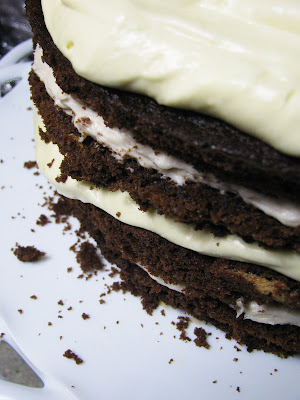 How to Make the Latest and Greatest Dessert: Bubblegum Macarons