I want to say that this Almond Croissant Recipe is my favorite, but then again, everytime I bake a croissant recipe – or eat a croissant for that matter – I say it’s my favorite.

Otherwise known as Croissants aux Amandes, this Almond Croissant Recipe is a traditional french croissant made with frangipane.

100 layers of sweet almond cream that melts underneath a
blanket of pastry dough.

Frangipane has so many culinary uses, and this is just one of them. Frangipane is a wonderful item to have on hand, and incredibly versatile. It’s also called almond paste, almond cream and sometimes marzipan.

The concoction is almonds that are crushed and pulverized then mixed with eggs, cream, spices and butter. It’s so easy to make at home in your blender!

When it’s baked into an Almond Croissant Recipe it melts into the croissant and tastes almost like honey. It’s absolutely delicious.

Other Desserts Baked with Frangipane

How to Make this Almond Croissant Recipe

This recipe utilizes a basic croissant dough recipe combined with frangipane to create an amazing buttery bread with a touch of almond infused sweetness.

Anytime you add any sort of filling to croissants, the filling is going to stick to the pastry dough. The layers next to the frangipane will not rise, instead they will melt and add a wonderful flavor to the pastry. 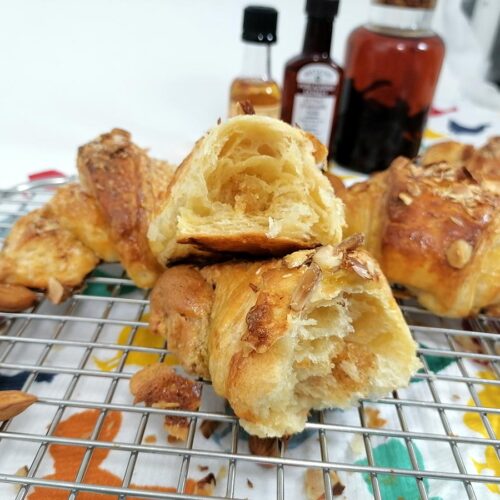 If you make this Almond Croissant recipe, tag @Fahrenheit350sweets on Instagram so I can see it! And I’d love it if you left a review and a comment below!

5 Reasons Why this Brownie Cake Mix Recipe is Revolutionary

Make This Baked Brie Croissant if you Want to Have the Best Sandwich in the World!